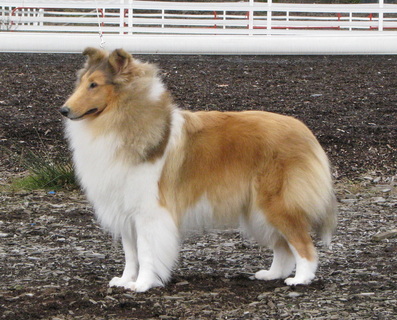 Reese @ 18 months old, Bred by Nancy Anstruther & Keri Campell
Reese, my sunshine girl!.  She is the start of my breeding program.  Nancy asked if I would be interesed in co-breeding and whelping a litter out of mother Ch. Tallywood Rekindled.  I jumped at the chance.  I had been waiting many years to actually have my name on a litter as a breeder, little hard to do with all boys at home.  I did try this before, but the smooth girl I have was spayed as a young adult due to circumstances.  I went into this litter with one thing on my mind, I need and want a girl.  She was it!  She had 3 very large brothers and she was only 3.5 oz when she was born!  This did not stop her.  She was and still is a tough cookie.  We called her peanut & she was born middle of may, when all the buttercups were up, hence the name Reese !  She finished at 15 months.  As she never has coat when the big US shows are on, she has only been stateside once in the summer and gained 1pt.  She is now in retirement and living with a great family!  We wanted her to be a spoiled princess and that is what she has!  She is now retired and living the life of a Princess with the Pires Family! She is by Am/Can Ch. Tallywood In A New Light out of Ch. Tallywood Rekindled. 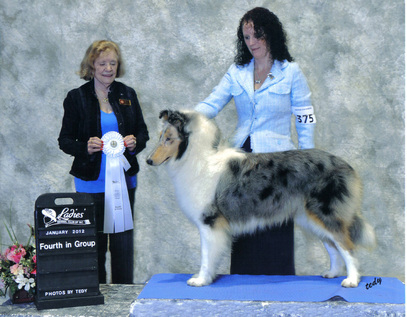 Vera @ 18 months, bred by Me, co-owned by Pearl Fabbro and myself
**Vera finished her US Championship in style!  She won BEST of BREED at PNWCC under Matt Stelter (Wyndlair) Nov 2014 from the classes, and BOW then next day under his wife, Anita Stelter (Classique) to finish her championship!**  This is Vera, or Vera Wang as she is commonly referred to.  She is the litter sister to Campbell, (Aychess Ne Obliviscaris) that we really didn't want to part with, but I didn't want another girl.  Pearl Fabbro, who lives about 10 mins from me, of Celticmoon Collies was looking for a blue girl with this head detail!  So it was decided that she would go and be a part of the Celticmoon Clan.  She has a 4 pt speciaty major for the 6-9 class under Mr. Hawkins (AKC shows).  She then blew off her puppy coat.  We just brought her back out, as you can see still not in her new clothes and took a group 4 in January 2012.  She will be seen as often as we can get her out whilst she is trying on new clothes!  She is currently training in agility and from what I am told, is quite a star!!!  We love this bitch alot and are expecting nice things from her.  She is sired by Can. Ch. Wild West's Mercury Rising, out of Can Ch. Tallywood Aychess Replica. Vera finished her Canadian championship piloted by myself in April of 2012.  At the our local specialty under Judge Jack Kilgour, she was Best in Specialty and was pulled in the group at the all breed twice that same weekend!  Litter plans are in the making for this fall (2015).  Fingers Crossed. 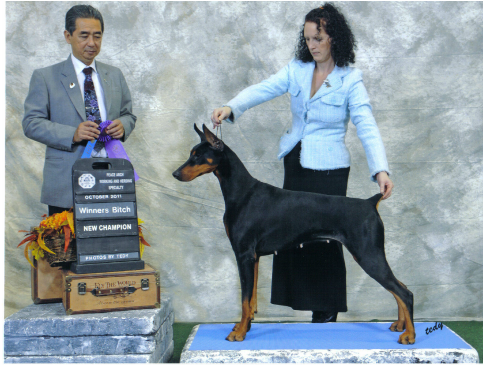 Selah finishing her Can Ch Under Mr. Lim at LMDF Oct 2011 bred by Jeff Wong/Greg McConnell
Selah!  What can we say about Selah?  Selah in hebrew means to take a moment and reflect.  She is a very, did I mention very, active girl! We had hoped her name would help her.  Not a chance.  She was bred by Jeff Wong & Greg McConnell of Caprigem Dobes located in Vancouver, BC.  After my husbands doberman of 10 yrs passed, it took 3 years for him to be ready for another.   This time we chose a girl.  What was I thinking?  She is doberman girl for sure!  But we do love a challenge!  Selah finished her Can Ch. October 2011 at the big TRADEX shows here in BC, at which i cried!  Those who know her will understand!  Although she was purchased for my husband, she has chosen me!  She is currently training in flyball, will be starting agility and already has started her obedience career.  She is by Ch. Trotyl de Black Shadow, out of Ch. Caprigems All the Reason.  Co-owned with Jeff.  Selah is now training in Flyball.  She has been training for a bit at flyball, and anyone who owns a dobe, knows how determined they are to do it their way, she has been a challenge.  Hoping to get a least her FD status!  She just needs to run 4 clean heats for that!! Maybe we should try nose work! She is now retired from flyball!  She just turned 8 yrs old, in February 2016 and has decided that she enjoys, just lounging around, watching TV and eating her bon bons!!