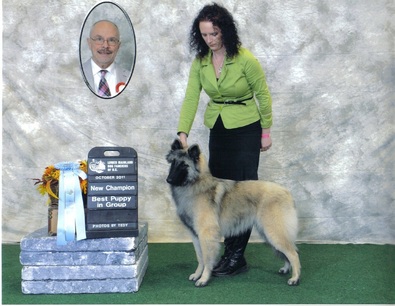 7 months old, Bred by Pearl Fabbro & Keri Campbell
Well this is Storm, aka Stormy!  And what a whirlwind she is.  Every once in awhile I love to hang out in the belgian ring, and a big thank you to Pearl Fabbro of Celticmoon for letting me join her on this ride occasionally!  Storm finished her Canadian Championship almost undefeated and in about 3 weekends of showing beating specials at just a day or two under 7 1/2 months old!  She is a stunner and very full of herself. She lives with Pearl, and I get to fly her around the ring, well actually I just hold on!  She is currently at home now growing up a little.  We look forward to having her back out soon and across the border.  Her mother is one of the only greys to finish their American championships on the west coast.  And we believe that Stormy will exceed our hopes and dreams!    She is with her co-owner working on her performance stuff and waiting for the primetime to become a mom! 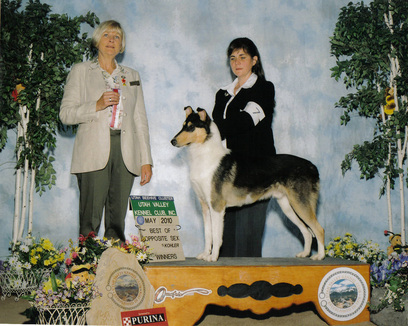 Diego finishing his Am Champ under Heide Menendez, shown by Jenny Laik
**NOW BACK WITH JENNIFER LAIK**  This is Diego!  Thank you to Jenny Laik of Colebrae for letting Diego come and live with us.  He was only supposed to be with me for a couple of weeks of extra socializing, but we here at Aychess fell in love with his endearing personality, not to mention we love this dog's head detail that Colebrae has solidly stamped into their lines!  Diego started his American show career off with a bang winning a 4 pt mjr under Anita Stelter, then finished very quickly with 3 mjrs and a couple of single points.  We then started his canadian showing and finished at Collie Club Of Canada going BOW under Mary Wells of Blossom Hill Fame in Mar/12.  He is now the sire of 2 very lovely litter co-bred with Celticmoon.  For info, see Litter news page.  He will be starting his Rally training this spring (2014).  He is also currently experimenting in agility!  Sheep are just not his thing.  He is by Wild West's Solo Debut, out of Am/Can Ch. Colebraes Cool Change. 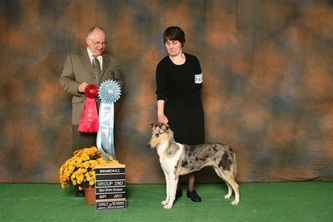 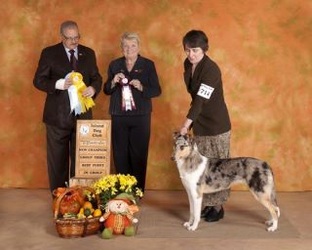